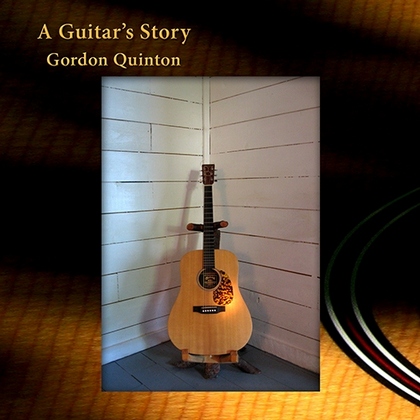 Gordon received the 2013 Instrumental Artist/Group of the Year award by Newfoundland and Labrador’s music industry association, MusicNL, for his recording, A Guitar’s Story.

The Guitar:
I remember walking by a store with my mother when I was three or four years old.  A small, plastic, yellow toy guitar in the window caught my eye and drew me to it.  I loved the look of it and I cried till she bought it for me.  It called to me!  I learned my first chords on a real guitar when I was about twelve years old.  My brother Doug’s friend, Roy King, came to our house with a beautiful, old Sunburst Gibson Archtop.  He showed us some guitar chords and how to use them to play songs.  It was magic.  I loved the sound, the feel and the look of this beautiful instrument and wanted one of my own.  I saved my money for about a year and finally, when I had the $12.98 that it cost, saved, I ordered my guitar from the Eaton’s catalogue.  It came in the mail after a few weeks and I was in heaven.  It was black and yellow and had a painting of a palm beach scene on it.  I spent countless hours in our old woodshed back home in Windsor, Newfoundland playing and figuring out chords.
Over the years, I’ve played and owned many guitars and continue to be amazed at the lovely sounds that can be produced by this wonderful companion.
This CD is a collection of tunes, new and old, that I have put together and represents a sound and style that I developed over the years.  It is my guitar’s story! 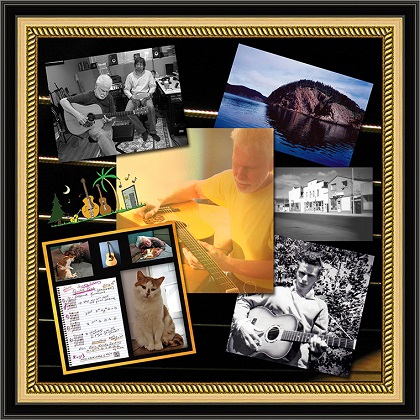 For Waldemar, Neville and Howard

This compact disc was digitally recorded and engineered by Craig Young during sessions in March, April and May 2012 at his studio in Paradise, Newfoundland.  In order to maintain a direct and spontaneous vibe, each tune was recorded live from the floor of the studio.  Complete takes were captured with no editing or overdubbing.

I’d like to thank:
Patti, for her love and constant encouragement
Quito, our wonderful feline companion; he has been beautiful beyond words and has so greatly inspired and enriched our lives
Craig and Norma Young, for opening up their home and studio to me
Craig, for his love of the guitar and his enthusiastic interest in this recording project.  Thanks for your insight and patience in helping me get the sounds, textures and colours that I wanted.  I really enjoyed hanging out with you and loved our many “guitar talks” over coffee in your kitchen.
Thank you to Michael Dominici, Lillian Fidler, and Robert Buck and all at Music Manufacturing Services for their fine contributions to this recording.
My gratitude to everyone who has influenced and supported my lifelong musical adventure!
Gordon

Copyright © 2012 Gordon Quinton/Woodnight Music.  All rights reserved.  Any unauthorized duplication, exhibition or distribution of this recording or any part thereof is strictly prohibited and is a violation of applicable laws. Made in Canada.